Create an Account - Increase your productivity, customize your experience, and engage in information you care about.

Kenilworth is located approximately 17 miles north of downtown Chicago, and is the newest of the 8 Chicago suburban communities fronting on Lake Michigan, commonly referred to as “the North Shore.” Of the communities in the area, Kenilworth is the only one developed as a planned community.

In 1889, Joseph Sears purchased 223.6 acres of land, at a cost of $150,300. Seven years later, the population of that area had reached 300 residents, fulfilling the new legal requirement for incorporation, and the creation of Kenilworth. Joseph Sears possessed definite ideas about how the village should be planned. Lots were large and streets were platted to maximize the availability of sunlight in each home, utilities were place underground, no alleys or fences were permitted, and construction standards were high. Mr. Sears believed a village whose center lies in the family should also have a church and a school and subsequently donated land for both.

The beauty of the village attracted many distinguished residents, including architect and town planner George W. Maher. A contemporary and colleague of Frank Lloyd Wright, Maher, in due course, proceeded to design approximately 37 homes in the village. His town planning expertise and civic dedication further enriched the village with most of the parks and civic sculptures, including the entry fountain, stone benches, planter urns, bridges, and entry pylons, which residents can still enjoy today. Maher played an important role in continuing the character of the village as Kenilworth expanded south and west through a series of annexations in the 1920s.

The village expansion in the 1920s included 40 acres in the southwest corner of the Village that belonged to the North Shore Golf Club. This parcel was purchased and developed by a group of civic-minded residents who formed the Kenilworth Realty Association to help carry out the Village Plan of 1922. With the annexation of land in the 1920s, the village grew to its current size of 0.6 of a square mile. As of the 2020 census, the population of Kenilworth currently stands at 2,514, a one person increase form its 2010 population of 2,513. 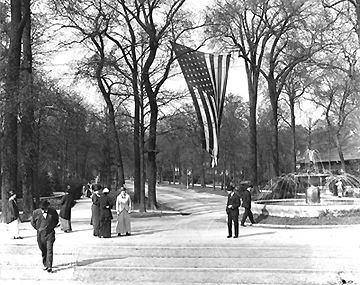